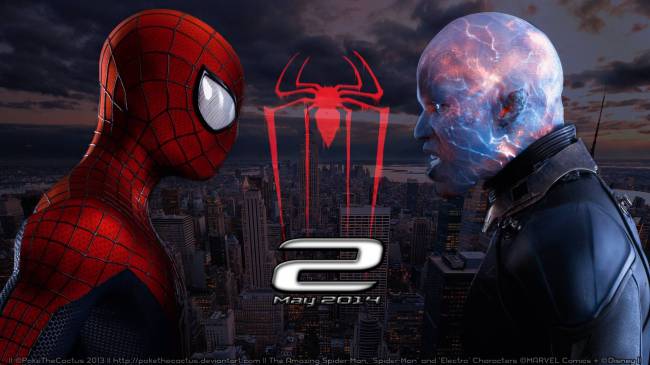 Once again Sony Pictures has graced us with another Spider Man film called The Amazing Spider-Man 2. This marks the second film in which Andrew Garfield portrays the famous web slinger and he doesn’t disappoint. Neither does Emma Stone, reprising her role as Gwen Stacy. We are also introduced to three new villains: Electro/Max Dillon (Jaime Foxx), Rhino (Paul Giamatti) and Green Goblin, aka Harry Osborn (Dane DeHaan), although the main villain here is Electro. Green Goblin and Rhino show up later in the film.

The most pleasing thing about Garfield’s Spidey is that the actor brings to life the wisecracking, spirited web head found in Marvel comics. At times it seems as if Spider Man has jumped straight from the inked pages onto the silver screen. This is quite refreshing too, because a lot of the time when a sequel comes about, the main character has somehow changed between the first and second film-anyone remember the drastic change Peter Parker had made between Spider Man and Spider Man 2?-not the case in The Amazing Spider-Man 2. Any changes that Peter Parker/Spider Man go through happen over the course of the story in the sequel-and they’re doozies.

Peter isn’t the only one going through changes in this film. The relationship between Gwen and Peter goes through its own metamorphosis as well. Max Dillon and Harry Osborn however, go through the most drastic changes, each becoming not only powerful super villains, but the embodiment of the psychosis they suffer from. Max, who only wants to be noticed and remembered instead of repelling everyone, becomes a creature whom attracts and absorbs all forms of electricity. Ironically the most repellent force of nature to humans. Harry Osborn, the son of Norman Osborn, who feels as though he’s been a throw away undeniably becomes one of the more repulsive villains from the Spider Man universe.

Through this observation, it appears that the main theme in The Amazing Spider Man 2 is that life changes us. Whether it be everyday things like graduating from school, deciding which college to attend, choosing to pick up a new career to make ends meet, or an extreme physical change. Except that there are two themes in this story, the second being that of finding hope within oneself when life takes a turn for the worst and in finding that hope, also discovering the strength to continue on.

The Amazing Spider-Man 2 is full of thrills, laughs, intense and heartbreaking moments. It is also chock full of spectacular visual effects, explosive action and even romance. Of all the movies to kick off the summer blockbuster blitz-yes it begins in May-this Spidey fan is more than pleased that this is the movie to do so. If you’re looking for a treat for your senses, or just a huge fan of Spider-Man check this film out. At the very least, it will be fun.