Sucker Punch is every sci-fi, fantasy, action, and anime fans dream movie. There is not a film out today that has four women dressed like they came out of an anime movie from Japan fighting Nazi zombies, robots, a dragon, and three giant samurai warriors. This shot from the original trailer where Baby Doll aggressively attacks one of those giant samurai is an excellent example of the kind of imagery seen throughout the film.

The fact that Baby Doll is flying through the air in an offensive against her enormous foe with naught but a katana and a 9mm, dressed in a Japanese schoolgirl outfit, is an incredible vision in itself. Does Sucker Punch offer more than intense action sequences, eye popping visual effects and a mind-bending storyline? 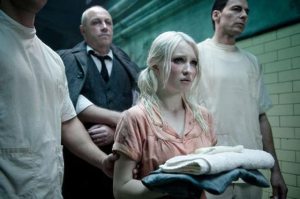 There is a definite understanding from those who have and have not seen the film that Emily Browning’s character, Baby Doll is admitted to a mental institution and intends to escape. It is also evident that she turns to her imagined world to circumvent the reality she is living. To that end there are three layers to the story. Baby Doll’s reality, her perception of that reality and the fantasy world she has created.

To Baby Doll, the mental institution is a gentleman’s club where she and Sweet Pea (Abbie Cornish), Rocket (Jena Malone), Amber (Jamie Chung), and Blondie (Vanessa Hudgens) are the entertainment who not only dance for the patrons of the establishment, but also perform other “favors” for the gentlemen who visit. This is unacceptable and Baby Doll enlists the others to help plan for their escape. In order for the escape to succeed they must retrieve five elements: A map, a lighter, a knife and key with the fifth item being a mystery.

The women treat each goal as a mission with Baby Doll serving as decoy because she is the most alluring and seductive dancer of the group. Whenever Baby Doll is required to dance, she escapes into her fantasy world and envisions how the missions are carried out. Each mission finds them in a different world environment. In the first, they are in World War I. The second puts them in a medieval world. The third mission has the women on another planet. In each of the environments the map, lighter, and knife are uniquely represented.

Sucker Punch is certainly a one-of-a-kind movie and is a most ambitious undertaking by director Zack Snyder. However, the real underlying story might not be starkly evident to the unseasoned moviegoer.

What some might miss, among the layers of reality and fantasy, is that Sucker Punch is a story of a young woman crushed by the tragic events in her life, yet finds the strength to fight the darkness within her.

Sucker Punch could use a few more ties to the reality that Baby Doll is experiencing, if only in support of the notion that her fantasy world is where she finds the courage to cope with the events that have occurred in her life.

Nevertheless, Sucker Punch is a movie that should not be missed. While it may seem like a crazy graphic novel come to life–in true Zack Snyder fashion—at the films core, there is a deeper human story.