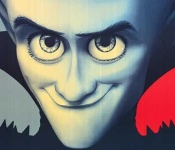 Getting straight to the point. Megamind is full of fun, laughs and even romance. There is also plenty of action. The film featurs the voices of Will Ferrell (Megamind), Brad Pitt (Metro Man) Tina Fey (Roxanne Ritchi), David Cross (Minion), and Jonah Hill (Hal/Tighten). While it appears to be merely a vehicle of entertainment, the motion picture gives the audience plenty of reason to be entertained with its outstanding visuals, animation and spectacular action sequences. However, the story on the screen has more than what is at its surface. Which  is nearly always the case with a Dreamworks animated release.

Amidst the jokes and action is the story of a person trying to find their place or purpose in the world.  In the beginning of the film, Megamind believes he has discovered that purpose as he and  Metro Man consistently fight each other. Megamind is on the side of evil and Metro Man is on the side of good.  All is right with the world as far as Megamind is concerned and nothing ever could; or should change.

To Megamind’s eventual dismay, things do change and he once again struggles to find his place or purpose in this world as he did while in his childhood. Being the genius that he is, Megamind comes up with a plan which unfortunately turns sour rather quickly and our  misguided and somewhat reluctant hero, must decide whether to remain on the dark side so to speak, or step out into the light and be something greater than he ever dreamed of being.

In the end, Megamind is a wonderfully crafted film that entertains in a mega-fantastic way and presents us with a story of how a person can rise up out of the darkness and become a better version of themselves when faced with insurmountable odds. Go see this movie. Even if it’s to have something to do or simply to laugh. You will not be disappointed.