Scott Pilgrim vs The Expendables 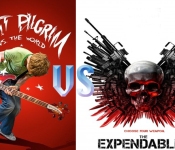 After having seen both Scott Pilgrim vs The World and The Expendables over the weekend, I thought it would be fun to pit the two films against each other. Sure, it might seem foolhardy at first glance given the box office results for both films with The Expendables at number one and Scott Pilgrim in the number five-spot, but there is a method to my madness so to speak. So, without further ado…

Scott Pilgrim vs The World is a one of a kind film as is many of Director Edgar Wrights films (see Shaun of the Dead and Hot Fuzz). It is also the first of his films-that I have seen-without Simon Pegg in it. But the absence of Mr. Pegg is not what makes this movie so one of a kind. What does make it unique is its style. Wright brings Scott Pilgrims video game infused world to vibrant and exciting life. I have never seen any film like it. The fight scenes are almost like they are straight out of a Street Fighter game complete with signature moves and finishing moves.  Scott Pilgrim is also unique in that it seems like it was pulled right from the pages of the comic onto the screen.

At first glance, Scott Pilgrim is just a fun movie with some pretty funny moments that had the audience laughing and really cool fight scenes. Yet, this is a story about love and the level we are willing to go in our fight to protect it. Or at least, win the heart of the person we love.  Along the way, the egotist that resides in Scott Pilgrim, finds that he has been on a different journey from the one he thought he was on. Not a fight for his band or the one he loves, but a fight for his own self-respect because he loves Ramona Flowers.

Michael Cera is fun to watch because his physical ability is unexpected, Kieran Culkin is a hoot and Mary Elizabeth Winstead is a beautifully aloof, yet strong Ramona Flowers (checkout her fight scene). Of course, there are the seven evil exes. My two favorites were the fight with Brandon Routh as Todd Ingram and Mae Whitman as Roxy Richter. Chris Evans as Lucas Lee was pretty hilarious.

I thoroughly enjoyed this film and recommend it to anyone just looking for something fun and different.

By contrast, The Expendables is a vastly different movie from that of Scott Pilgrim. While the former is purely a fantasy version of real life, the latter has no such delusions as it centers on the reality that mercenaries face.

A mercenary by trade is a highly trained killing machine that is usually hired to do the jobs that the CIA or FBI can’t do, which makes him expendable. Hence, the title of the movie.

Sylvester Stallone again returns taking on the dual roles of director and actor for this film which follows a squad of mercenaries and explores their lives both on the job and off resulting in lots of explosive action amidst moments of reflection and self discovery. The plot has some weak points, but it works overall as we follow the group of mercenaries to a small island and liberate its citizens from a tyrannical military government and a disenfranchised ex-CIA agent played by Eric Roberts. Not to disappoint, they do it the way we would expect. Lots of explosions and bullets. There were a couple of really great hand to hand combat scenes. Most notably a fight between Dolph Lundgren’s Gunner Jensen and Jet Li’s Ying Yang. Probably one of the best scenes in the film.

Personally, I think the main draw for this movie is its cast. Where else are you going to see the likes of Sylvester Stallone, Dolph Lundgren, Jet Li, Jason Statham, Mickey Rourke, and yes, even Arnold Schwarzenegger and Bruce Willis share screen time. Essentially, this is the 2010 equivalent of The Magnificent Seven which also included a once in a lifetime ensemble cast in a movie about guns for hire. The characters are just tougher and have much bigger guns; louder too! I thought I was going to go deaf when Terry Crews character Hale Caesar (yes seriously) starts turning bad guys to paste with his automatic shotgun.

Conclusively, both films are great to watch. However, Scott Pilgrim, in my opinion; is the better film as it has more value entertainment wise and adults are going to be more likely to take their kids to see it. For the record though, The Expendables is the only movie of the two where you’ll get to see tons of things go ka-boom, which really made the film for me.

Read more from Movie Reviews
Michael Cera, Scott Pilgrim vs The World, Sylvester Stallone, The Expendables
← Salt The Ride
Easy A Gets The Grade →
1 Comment Post a comment