This Isn’t Your Mother’s Robin Hood

Nor is it the Robin Hood we have all grown to know and love as a matter of fact. It isn’t the complete opposite either since director Ridley Scott chose to tell the story from a historically accurate point of view. Were you to compare this installment of Robin Hood with any of the versions from previous decades, it appears to be a completely different film.

There is no dashing handsome swashbuckler like Errol Flynn, a fox a la Disney’s Robin Hood(which, by the way is the most recognizable version around the world), or even Keira Knightly as a female offshoot of the legendary Robin Hood (Disney’s Princess of Thieves). Most especially it is not a certain Kevin Costner movie-what was the name? Oh Yes.-Robin Hood: Prince of Thieves. The latter being the only one I know of to attempt a historical version of the story although the only historical aspect was that Robin Hood returned to England following his time fighting for King Richard in the Crusades.

In Ridley Scott’s take on the famous legend we learn much the same thing and that Robin Hood is known as Robin Longstride. An archer in the King’s army. 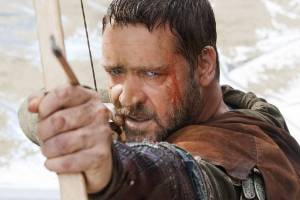 Perhaps the most notable and confounding thing in this version of Robin Hood is that Robin and his merry men are only seen stealing from the kingdom of England once in order to save the village of Nottingham. This action alone does not even make him an outlaw. As a matter of fact, Robin and his friends end up helping to save England from an invasion. At some point in the middle of the film I realized that I was not watching the story of Robin Hood the outlaw hero of Nottingham, but rather the story of how he became that outlaw.

In short, Robin Hood, starring Russel Crowe and Kate Blanchette is not a film about a man outwitting a corrupt English government, but rather the story of a common Englishman discovering his own history and rising up to protect his country and the people he loves ultimately becoming a hero of the people.

The film is entertaining and informative film at best yet not as emotionally riveting as I would have liked,  but  if by chance Ridley Scott gets his sequel we will see the hero Robin Hood we are expecting to see.