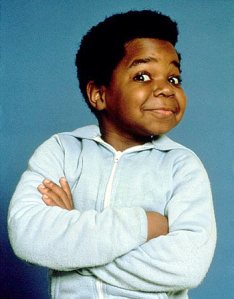 iff’rent Strokes. Much to the chagrin of our mother my brother and I would copy him when we didn’t know what mom was trying to tell us.

As young as I was Gary Coleman made a lifelong impression on me with that one sentence and the face that he would make to communicate his confusion. It was funny and serious at the same time. Funny, because I laughed every time he did it. Serious because Arnold truly meant to convey his confusion or shock. Sometimes he used it as a sort of a “Hey now, wait a minute.” type line. I could compare it to Jackie Gleason’s “To the moon Alice!” or Bugs Bunny’s “What’s up doc?” Both of those have a lasting significance that make them timeless. So it is with “What’cha talkin ’bout Willis?”

However, the affect that Gary Coleman had on a generation was not just because of that one line. He gave Arnold Jackson heart, charisma, attitude and outright spunk. He made him real. As real as you and I. That is the true wonder and magic of what Gary Coleman did. For eight years he made us laugh and even feel sadness. By doing so he made himself, Gary Coleman relevant to the rest of the world. Not that he really needed it and though his career as an actor did not reach the acclamation of some who started on television at about the same time, he remained famous after the show ended just for being Gary Coleman.

I will never forget th

e time when Gary Coleman as Arnold Jackson graced our television screen and livened up the prime time living room. Nor will I ever forget the television show that made it possible.  Diff’rent Strokes is now a classic which will forever immortalize Gary Coleman in his relative youth and at the top of his game. A beacon of sunshine that he managed to keep into adulthood.

For me, a little boy who is now a man, Gary Coleman will forever symbolize a time when life was carefree, the future unwritten and bright.

Although there have been those younger, with more lucrative and glamorous careers than he that have passed on in recent years, Gary Coleman’s death at 42 somehow seems to have come way too soon. I hope his rest is peacful nonetheless.

He left his mark on me. You can tell if ever we meet and I give you a sideways glance out of the corner of my eye, scrunch up my face and say “Heyyyyy!!” in response to some teasing remark, because in my head I am thinking ” What’cha talkin ’bout Willis?!!”