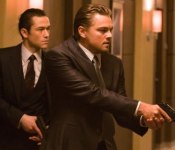 There are a number of films throughout history that have made such an enormous impression on audiences and filmmakers alike, that they have been honored with an Oscar nomination. A great many of those that have won the coveted golden statue are films we know and love. Pop culture icons even. Though not all are honored enough to become Picture of the Year, it seems that even those movies that are simply nominated for an award are the least forgotten. Inception is such a film. It is nothing short of a masterpiece.

Some may think I am getting ahead of myself in saying that Inception is Oscar worthy, but I like to think that if someone has not said it already I might as well be the first and even if I am not I feel it deserves another push in that direction.

In my opinion, Inception is not unlike the masterpieces of a master painter such as Leonardo DaVinci or the grand architecture of Notre Dame cathedral. Complexity, texture and simple imagination culminating to form a single concept. For Christopher Nolan’s latest celluloid tapestry the concept is simple enough: a persons deepest secrets are locked away in their minds and the door way to those secrets are their dreams. All one needs to do is navigate through the subconscious in order to uncover those secrets.

The concept may be simple, but the execution is far from that and Nolan’s story proves just that by taking his characters so deep into the dreams of another that time itself seems to become irrelevant and he takes the audience with them.

We follow our hero, Cobb (played by Leonardo DiCaprio) and his team as they take on the impossible task of “Inception” rather than extraction. By definition, extraction is the removal of an object from its place. Inception is the exact opposite and in this film it is literally planting an idea so deep into a persons subconscious that they believe they came up with it themselves.

Cobb is accompanied by Arthur (Joseph Gordon-Levitt), Ariadne (Ellen Page), Eames (Tom Hardy), Saito (Ken Watanabe) and Yusuf (Dileep Rao) as they journey through a rabbit hole vastly stranger and wonderous than the one Alice fell through in Alice in Wonderland. Their goal is to plant and idea into the mind of Robert Fischer Jr, the son of a successful business tycoon. Along the way, the team is faced with the realities of the unreal and must venture ever deeper into canyons of the mind in order to succeed.

Inception will spark your imagination. It will take your breath away. It will leave you in unspeakable awe. It will make you want to watch it again and again just to unravel each and every thread; to strip away each layer til there is nothing but the canvas beneath. It is that alone which makes Inception worthy of an Oscar and perhaps, dare I say it; Picture of the Year? We shall see.