Easy A Gets The Grade 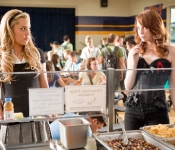 There was once a man named John Hughes who made movies such as The Breakfast Club, Ferris Bueller’s Day Off, and Sixteen Candles. These were movies that put the likes of Judd Nelson, Molly Ringwald and Matthew Broderick into the hearts and minds of teenagers during the eighties. Easy A; directed by Will Gluck and starring Emma Stone is most certainly an homage to the late John Hughes who passed away last year. Emma Stone’s character Olive, even makes reference to John Hughes while questioning if chivalry only exists in eighties movies where she says, “I want my life to be an eighties movie.”- lists a number of scenes from iconic films from the decade- and then; wisely states, “John Hughes does not direct my life.”

At its core, Easy A is just a movie about a teenage girl who finds herself in a situation which leads her to do a lot of question asking and lesson learning. It also takes her through some heartache. Olive’s situation is reminiscent of a similar one in the eighties movie Can’t Buy Me Love, which starred a young Patrick Dempsey. In that movie, a teenage boy who is tired of being a nerd, hires a cheerleader to pretend to be his girlfriend so that he can be popular.

The similarity in Easy A occurs when Olive, after lying about losing her virginity; does a favor for a classmates reputation by pretending to have sex with him. This one favor turns into a number of others and Olive soon finds herself with a reputation as the school tramp. She decides to play along and feeds the fire by changing her look and donning a red “A” on all her clothing after being inspired by the classic novel The Scarlet Letter. This choice of course leads to disaster and Olive discovers that her new reputation is far worse than her old one.

Amanda Bynes and Emma Stone in Easy A

What I love about this movie is that it really is a kind of throwback to the old John Hughes formula of screenwriting and film making, in that it takes the audience on a personal journey of life lessons and reminds us of how our choices in life can have unforeseen and often large consequences. Emma Stone is perfect as Olive and her co-star, Amanda Bynes is delightful in her role as Marianne. Easy A is a must see in my opinion and I enthusiastically give it a bright red “A”.