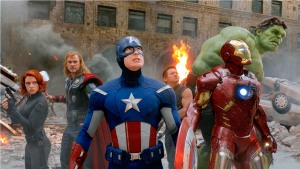 Easily one of this years most anticipated movies, The Avengers has already broken box-office records by earning over $200 million in just the first weekend. It really is not so surprising when you think about it. The film has Thor, The Hulk, Iron Man and Captain America. All four are characters from the last few years of summer box office hits. The most recent being Thor, Captain America and Iron Man 2. Add in highly advanced secret government organization–S.H.E.I.L.D–and a power hungry demigod set on ruling the world, it all amounts to an epic superhero movie.

Summarily, Asgardian Loki (Tom Hiddelston) is in search of the Tesseract also known as the cosmic cube, which has the power to open a bridge between worlds. He intends to use this power to bring an army from another planet in hopes to subjugate the people of Earth. The Tesseract is the same cube that The Red Skull used to power Hydra’s weapon in Captain America. As an act of desperation, Nick Fury decides to put “The Avengers initiative” back into action and recruits Bruce Banner (The Hulk), Tony Stark (Iron Man) and Steve Rogers (Captain America) to join S.H.E.I.L.D agent Natasha Romanoff (Black Widow) in an effort to recover the Tesseract from Loki. Thor and Agent Clint Barton (Hawkeye) join of their own volition. Once the team is put together, they find that Loki’s plans are not the only threat the heroes must deal with. Each of the heroes are loners in their own respect and used to doing things in a certain way without having to consult with anyone else, thus they must learn to work together if they are to have any hope of bringing down a fanatical Loki and his insurmountable horde of alien assailants. Oh the incredible things that happen when the heroes finally work as a team! Pack a wallop indeed! Perhaps that is an understatement, but the action is certainly epic.

However, the epic nature of the film is not solely due to the unification of seven of Marvel’s greatest heroes, but the unwavering portrayal of the characters by Robert Downey Jr, Chris Hemsworth, Chris Evans, Mark Ruffalo; Jeremy Renner, Scarlet Johannson and Samuel L. Jackson who fill their shoes and the skilled collaboration of action, humor and drama within the story. It is in the dedication of Director Joss Whedon and the crew behind him to bring the fans a film they will love. They certainly succeeded. The Avengers is entertaining in every way. It has been a while since this movie goer has heard the entire audience cheer and laugh together. With certainty that will be the experience of any who goes to see this film.