Battle:Los Angeles The Few. The Proud

Battle:LA is a war movie. The main difference between it and other war movies is the enemy is not human, but from another planet and they have come to exterminate the human race.

Some might try to compare the film to other alien invasion movies, like War of The Worlds or Independence Day. Let them. They are missing the point.

What those individuals aren’t seeing is that Battle:LA salutes the armed forces of the United States of America. Most particularly the Marines.

Aaron Eckhart is SSGT (Staff Sergeant) Nantz who is preparing for retirement. When the enemy strikes he is called to battle one last time. Though soldiers in his new squad question his ability to lead because of an incident in Iraq where two men under his command were killed, he does his duty and does it well. Proving that he is a capable leader.

The mission is to locate civilians and bring them to safety before a scheduled bomb drop on the city. The Marines are met with ever increasing odds even after they are joined by an Air Force Tech Sergeant (Michelle Rodriguez). Still, the soldiers continue on. Determined to defeat the advancing alien threat.

In the end the film has one clear message: if ever the world were invaded by hostile aliens our military will fight to the death to protect their families, country and way of life because they are the few and the proud and they do it for us everyday. 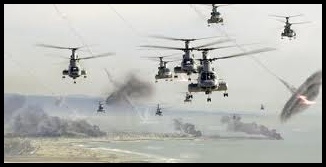