Jack Harper is a technician living sixty four years in the future. Earth is now a wasteland following a war in which an alien invader destroyed the moon causing earthquakes and tidal waves. Surviving humans have evacuated Earth for Titan, one of Saturn’s moons. Jack and his partner Victoria, are responsible for maintaining and repairing drones used to protect giant hydro collectors taking Earth’s water for use on Titan.

Everything has gone smoothly for the team with only two weeks left before they are able to join the rest of the humans living in an enormous space station orbiting the planet awaiting departure to Titan. Their daily routine is interrupted when a spacecraft crashes down not far from their station. Jack investigates and discovers a female survivor. The woman’s arrival and the impossible fact that she knows Jack’s name set in motion events that changes his view of Earth’s fate and reveals a past he had forgotten. 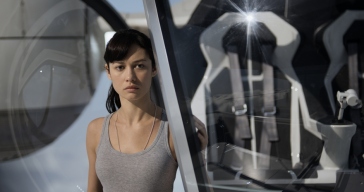 Oblivion stars Tom Cruise, Morgan Freeman, Andrea Riseborough and Olga Kurylenko. The film provides some breath taking visuals and the story is very intriguing, though it could use a little more tension. However, this is not a thriller or an “all guns blazing” action-the action bits are done very well-Oblivion is in fact, an adventure about how the past can be of such great value, that without it we cannot hope to have a better and brighter future.